My First Trip to Korea

Some impressions from Korea which I visited for the Baryons 07 conference.

The Baryons 07 conference took place in Korea at National Seoul University. The conference schedule was tight and a little stressful, but I still managed to sneak out on the weekend and see something of the surroundings. As I found in other trips to Asia, many people are very friendly and helpful towards foreigners. Bus drivers will also be careful when elderly enter, allowing them to first find a seat before driving off with full acceleration.

A particular treat was the conference dinner at a restaurant called Sanchon, a vegetarian restaurant owned by an ex-monk. The atmosphere is very unique and the selection of Kimchi dishes both huge and varied. 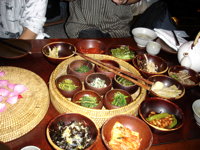 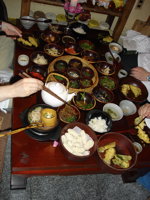 Not only the food, but a traditional dancing, music and theater show made the visit more than worthwhile. The only downside was that we were rushed out pretty quickly since our bus was scheduled to leave rather early following the conclusion of the folklore event. We could easily have spent much longer there and eaten much more. To be honest, the excursion had more of the feeling of a “Europe-in-10-days-trip” (or, in this case, rather “Seoul-in-10-hours”). On the other hand, this is always a reason to return for more ;^)

Seoul also offers a large selection of tea houses with all sorts of specialties. We have tried out this Pine Needle tea. It is a tee made from the leaves of a pine tree! Quite unusual, indeed. The white stuff in the bottle is sugar which is added as a preservative. So initially the taste was very sweet, but after drinking it for a while, the flavor changed. Oh, and just for reference – although there is lots of room for having meat dishes in one of the numerous barbecue restaurants, I have never had dog. Not that I wasn't curious to try it, but I didn't know how to order it on my own and never was with Korean-speaking people who wanted to order one.

The shopping streets reminded me of Japan – large, colorful, pop … and extremely busy. T-shirts with foreign writings on them (I even saw some German!) seem to be quite popular. The words printed on the T-shirts are rather meaningless — I guess it’s the same with people wearing Asian-looking T-shirts in Europe.

I went there with a colleague from Armenia who was reasonably used to haggling over prices, and also very proficient at it. That is certainly a very useful skill to have; somehow in Germany we lack education in such practices!

Then there is the Yongsan Electronics Market. It is on the cover of the Seoul edition of the Lonely Planet travel guide. Practically, however, I did not like the atmosphere and since I was not on the look for electronic gadgets I left pretty soon. I found it more rewarding to check out the underground markets, which are – apparently not uncommon in Asia – remarkably large. I must point out that Japanese shopping malls are prevalent in Seoul. However, it seems that even in a Japanese mall, neither English nor Japanese will get you far. Pretty much the only thing people speak is Korean. Which, unfortunately, I had not learned beforehand. 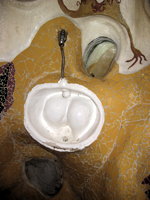 If you are looking for something really strange then I suggest checking out a bar called Mu in Sinchon. I have a pretty unusual photo from the men's room; but the entire interior design is like that.

Another local specialty is fresh squid. Fresh as in “still moving”. One of my colleagues put a movie on Youtube. Actually, I have not tried that one since I already had something similar in Japan.

For day truo I visited Pusan, the harbor city in the South of Korea. Since I was scheduled to give a talk at a symposium I did not have the chance to tour the city. I enjoyed a 1st class train ride, though, in the super-fast KTX train – the Korean version of the french TGV. Particularly compelling were the usage instructions which featured a magician explaining everything in a rather entertaining way. Oh, I did not need to show my ticket to the conductor! Since all seats are booked and connected to the tickets, they will automatically know which seat is occupied at what time and thus don’t need to check the tickets separately. I believe this system is notably smart!

The visit to Korea was rounded up with a hiking tour in the Bukhansanseong National Park. It is close to Seoul and offers a magnificent view over the city; at least once you make it to the top. Definitely rewarding if you are in the area and have a day to spend. 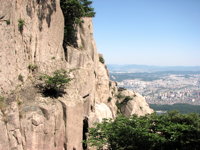 Initially, hiking upwards was quite easy and not challenging. But the higher we got, the more challenging it became, and the last part to the top was really tough! Still, a very worthwhile trip that we enjoyed!